We’ve made it to October, and that means it’s officially spooky season aka Q4! So, let’s not delay – here’s what’s intriguing us in the world of digital marketing this month. TikTok is trying to eat BeReal’s lunch, according to Meta’s internal data, Instagram Reels are gasping for air, Google is making some positive UI changes, and there’s some rumblings about how much a Netflix ad will cost.

If this is your first time hearing about BeReal, then it probably means you are too old to be Leonardo DiCaprio’s girlfriend.

BeReal has been the social media sensation of the summer with the youths. It’s a photo-sharing application that notifies users to post one photo per day to show their followers what they are doing in that exact moment.

It’s very much a reaction to the curated approach you see with apps like Instagram. You can post outside the window, but your delay is announced to your followers on the app. No matter your excuse, accusations could arise that you’re not being real!

Naturally, anytime anything gets traction like this the tech giants start “benchmarking.” Instagram is notorious for this. They copied Stories and AR selfie filters from Snapchat. Hell, we’ve written quite a lot in the last year about how Reels is Instagram’s attempt to take down TikTok (more on this in a sec!).

TikTok must have been taking notes on how Instagram does business because they’ve beaten Instagram to the punch with the launch of TikTok Now.

The US will have access to the feature in the main app, but currently in Ireland and other regions TikTok Now is a standalone app. If it tests well then, we wouldn’t be surprised to see it show up in the main app everywhere else.

Instagram probably aren’t that far behind as a leak recently showed them prototyping a feature called IG Candid. Snapchat is working on one too, but nobody cares.

BeReal is a fun little app, but we think it has an expiry date. It gained traction over the summer when young people were out doing fun summer kid things. We’d expect it to get boring quick as it naturally turns into pictures of going to, being at, and coming from school. We think this is the exact reason why adults haven’t flocked to the app – commutes, laptops and coffee mugs isn’t exactly riveting content!

Meta is going all in on short term video content with Reels, and unfortunately, it doesn’t seem to be going well.

According to a document seen by The Wall Street Journal, Instagram users cumulatively spend 17.6 million hours a day watching Reels. This is less than one-tenth of the 197.8 million hours TikTok users spend each day on that platform.

That’s got to sting. Especially after their summer of proverbially trying to make fetch happen. 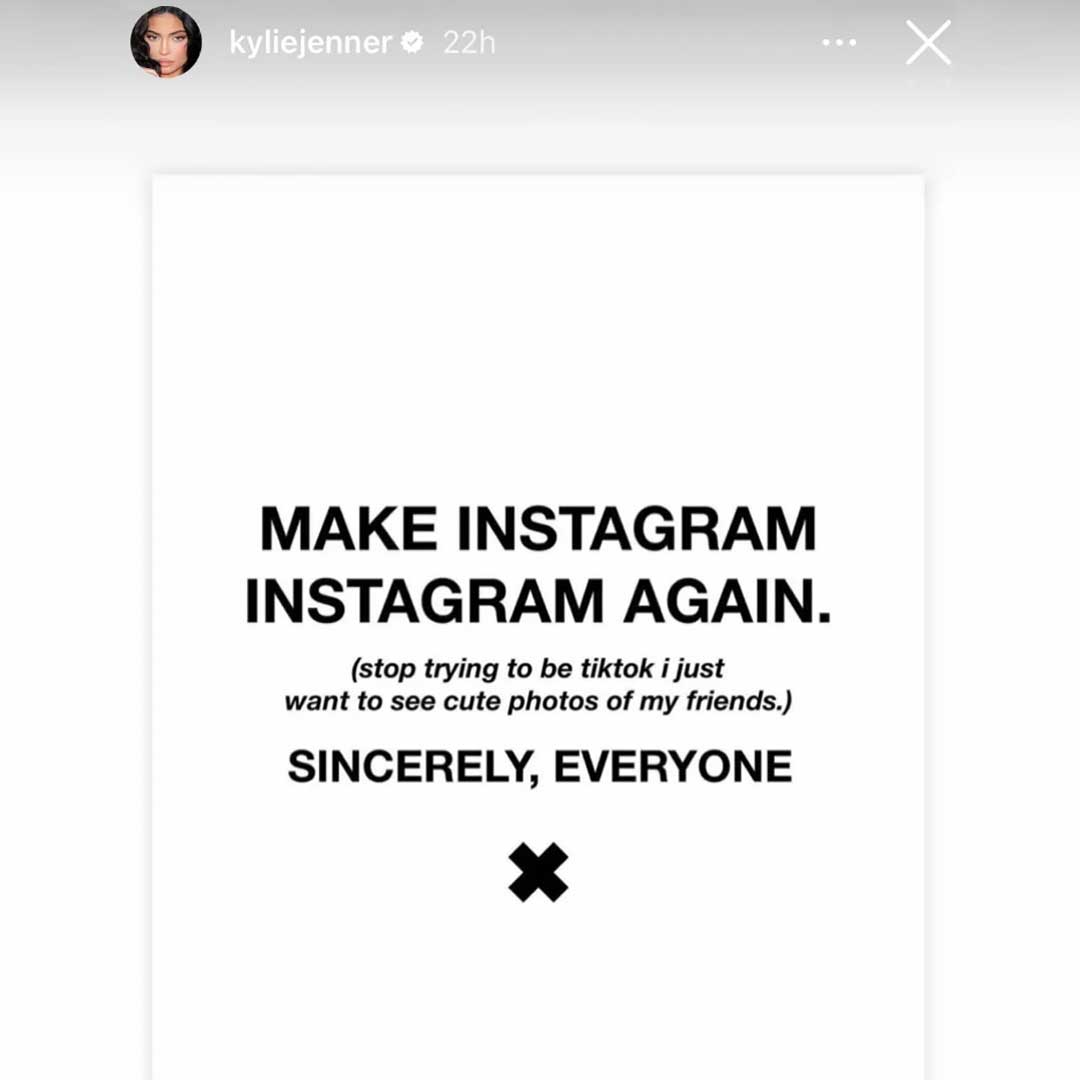 When Kylie Jenner posts, tech giants listen. She was infamously blamed for Snapchat losing $1.3 billion in stock with just one tweet. In response, Head of Instagram, Adam Mosseri released a video defending the changes saying they were designed to make Instagram better. His tone is meant to reassure you, and Instagram have not been as aggressive with the changes since, but if you listen to him, it’s clear that they have no intention of trying to put the Genie back in the bottle.

Videos will dominate Instagram because it’s videos you actually like. Not pictures. It doesn’t matter that you’ve explicitly told us you prefer pictures. You’re getting videos.

The document seen by the journalists was published in August, and worryingly for Meta, it said “Reels engagement had been falling—down 13.6% over the previous four weeks—and that most Reels users have no engagement whatsoever.”

Meta might be headstrong with Reels. People didn’t think stories would work, but that turned out to be the right call. The difference between the two is that stories was simply an add-on feature and reels are trying to fundamentally alter how you consume Instagram.

Okay, so moving on to something far less controversial, and actually quite positive. Google is making a UI change to Google Ads by rebranding extensions to assets.

Previously, creating and managing assets such as call extensions or site links were done separately from the campaign creation process. Now, they’re created in the same step.

We honestly love this because it means we can set up campaigns quicker!

How much will a Netflix ad cost?

Digiday anonymously spoke to big-wig media buyers who have been given an insight into Netflix ads, and frankly, they’re not impressed.

Below is what they’ve found out:

Obviously, and unfortunately this is not going to be a realistic option for everyone. However, even advertisers with the big bucks are balking at this.

Do you need help with your digital strategy or have a specific topic you want us to cover?

If there’s anything you want us to cover in our future Sparks Roundups, or if you need help planning and implementing your digital marketing campaigns, just pop [email protected] an email, and we will be happy to get back to you.

Happy 1st of December everyone, it's officially th

Happy 1st of December everyone, it's officially th